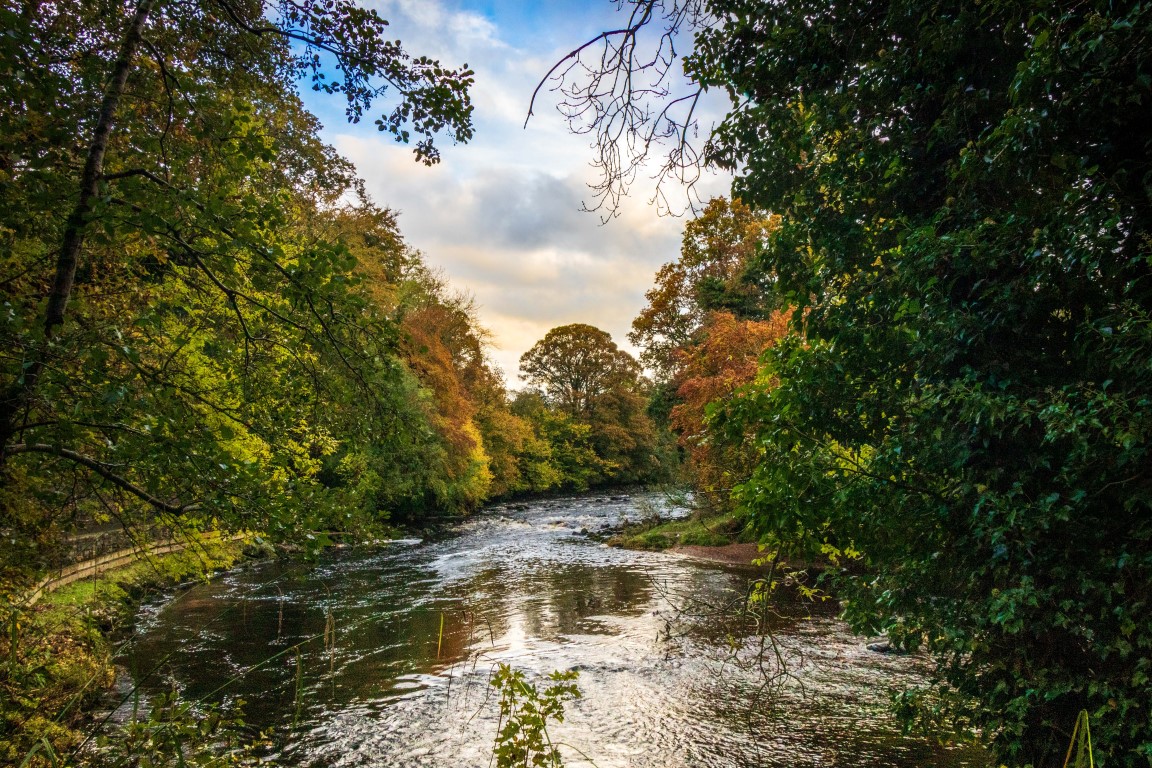 The River Roe rises in Glenshane in the Sperrins and flows through Dungiven, Burnfoot, Limavady and Myroe. It varies in width from 5m to 20m. The Roe has 8% of the Northern Ireland spawning population of Atlantic Salmon which means it is one of the most important salmon rivers in the British Isles. As well as salmon the river is home to brown trout, eel, stone loach, minnow and 3-spined stickleback. At the lower reaches migrating Sea Lamprey have also been identified. On a walk along the Roe look out for birds such as dippers and kingfishers and keep an eye open for otters. Technically, the Roe Valley is a wide glacial valley. Aesthetically, it's some of the most beautiful countryside you'll see in Ireland. 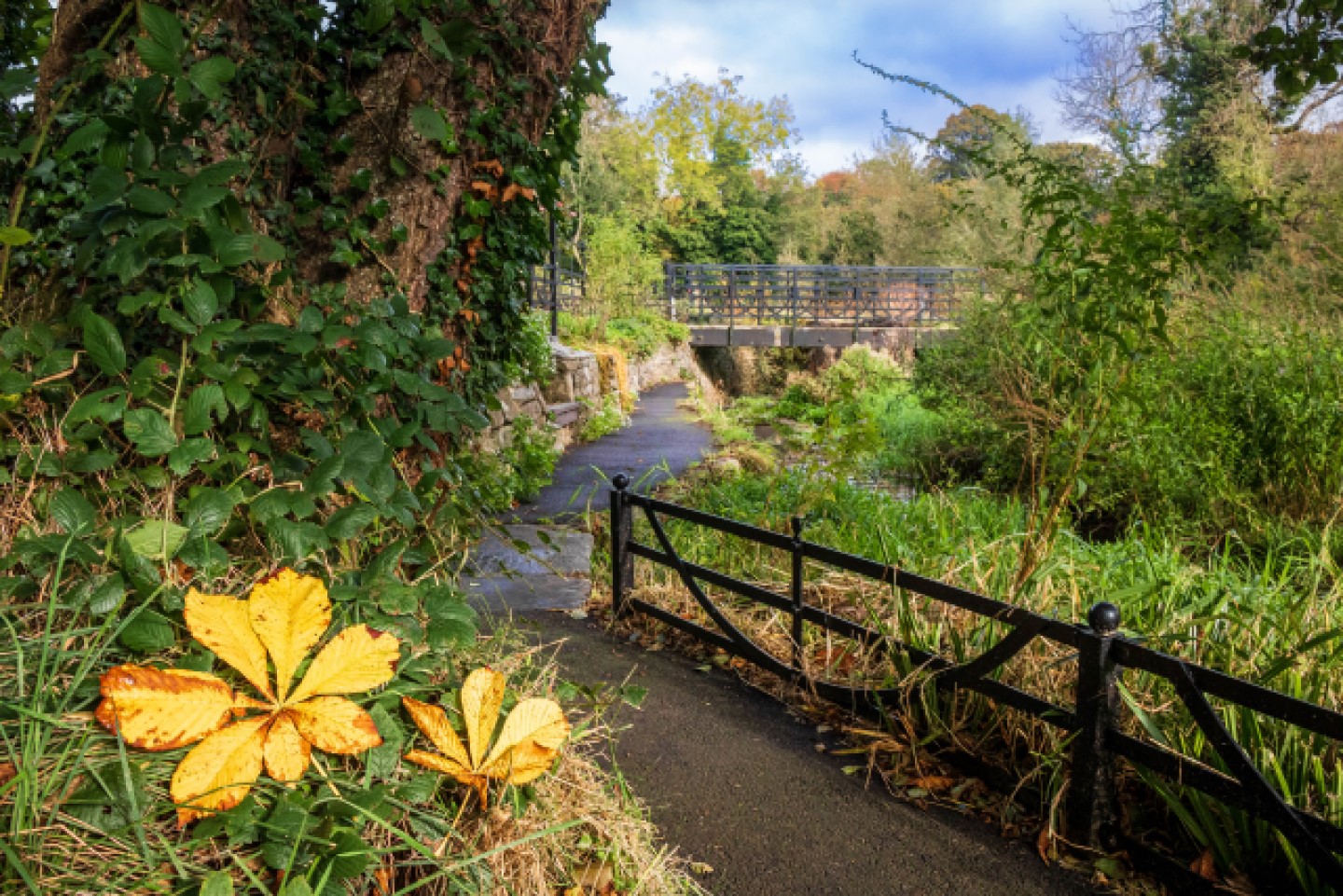 The Roe Valley Country Park, on the outskirts of Limavady, is the perfect start to a visit. Here you'll be introduced to the natural environment: the salmon rich River Roe, beautiful, tranquil wooded paths, riverside walks (a treat for the ears as well as the eyes) and a wealth of wildlife. You'll also see relics of the linen industry and one of the earliest hydroelectric power stations, built by John Ritter in 1895 to power his home, Roe Park House, now the Roe Park Resort Hotel. 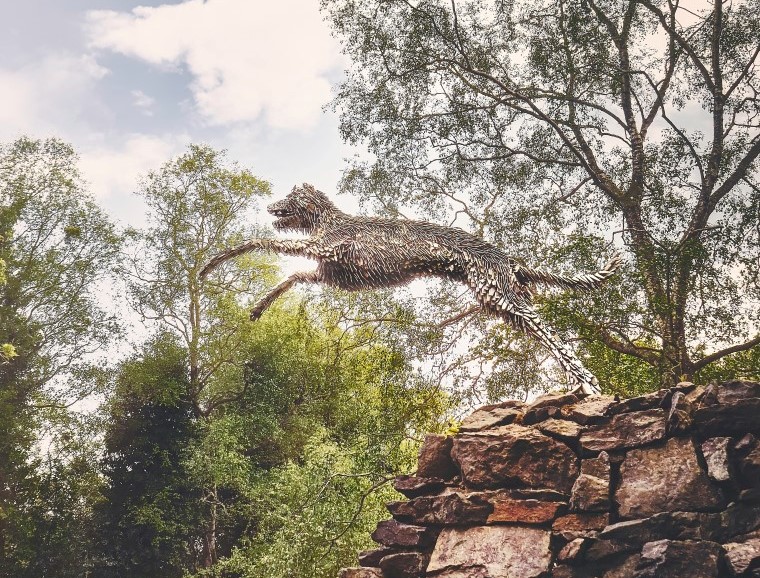 The park is also the site of local myths and legends. The O'Cahan clan ruled the Roe Valley from 1122 until they were defeated by the Normans in 1260. Over a century later they regained power but only for a further 30 years. Holding power entailed surviving numerous battles and sieges. The legendary dog leap (LEEM AN VADAH is Irish for the leap of the dog and anglicised it becomes Limavady) refers to the story of how a faithful dog of the O'Cahans managed to leap across the Roe to deliver a message to their allies in Dungiven to rescue them from one such siege. The place it's supposed to have happened in the country park is known as the Dogleap. 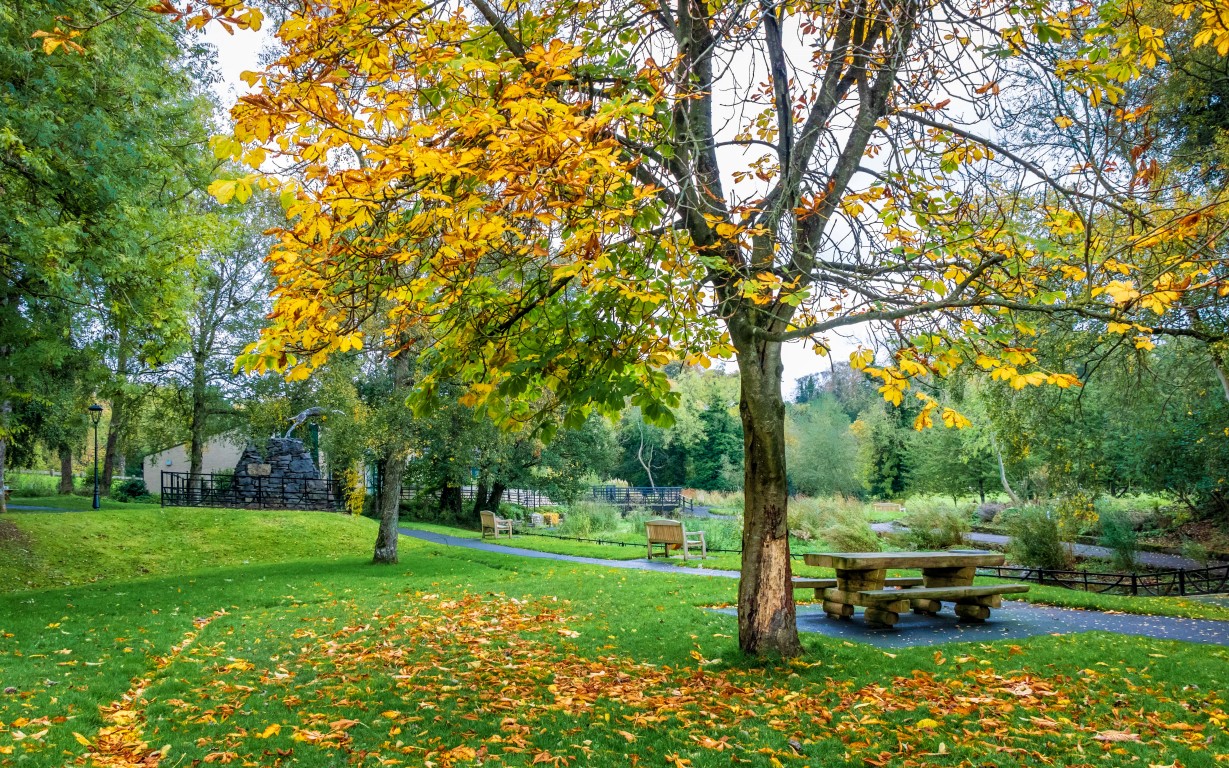 The visitors centre and Green Lane Museum provide a quick-start guide but the joy of the Park is that it's all there to experience for yourself: flax drying fields with watch towers, derelict buildings and a waterwheel and mill building (which houses the Green Lane Museum).

Having visited for the first time maybe you'll want to avail of the facilities. Fishing for salmon and brown trout is allowed with a permit and the forest is ideal for orienteering. 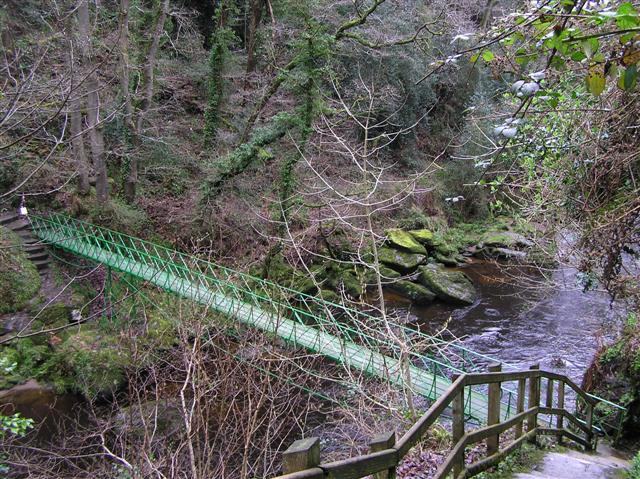 Along the Roe Valley from Dungiven to Limavady are Burnfoot, Gortnaghey and Largy. Taking the Drumrane Road, when you come to the village of Burnfoot look out for the sign for Bovevagh Old Church on the left. This takes you to a secluded 16th-century ruin in a tranquil setting. On the Drumrane Road heading for Limavady look out for the green sign on the right for Carrick Rocks. This takes you to a small car park from whence a short flight of steps will take you down to the listed footbridge. It was built with a unique double-span bowstring construction in the early 1900s for people to cross the river to the parish church of Carrick. Beautiful riverside walks on both sides of the river through Carrick Rock Gorge take you to the main Roe Valley Country Park. 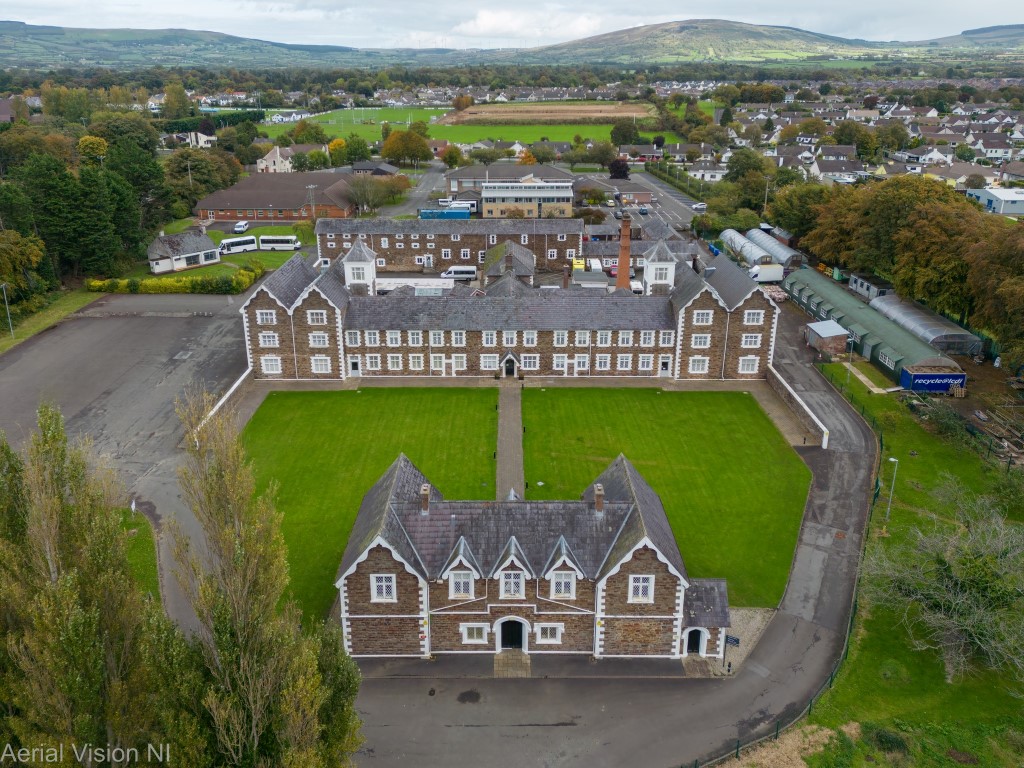 The Limavady Union Workhouse, near the centre of Limavady town, was opened in 1842 and is thought to be one of the best preserved workhouses in Ireland. Like other Irish workhouses, Limavady Union was built to standard plans by the architect George Wilkinson. Although designed to hold 600 inmates it held 950 at the height of the Famine. Admission to the workhouse was intended to be a last resort so conditions were deliberately harsh and particularly hard on families. Like many others it was repurposed as a hospital, becoming the Limavady Cottage Hospital in 1932, only closing in 1998. Unlike many other workhouses it survived the change of use more or less intact. The building has been restored by Limavady Community Development Initiative and, by appointment, visitors can have a guided tour of the original gatehouse and one of the dormitories and can access some of the fascinating archive of documents rescued by LCDI. 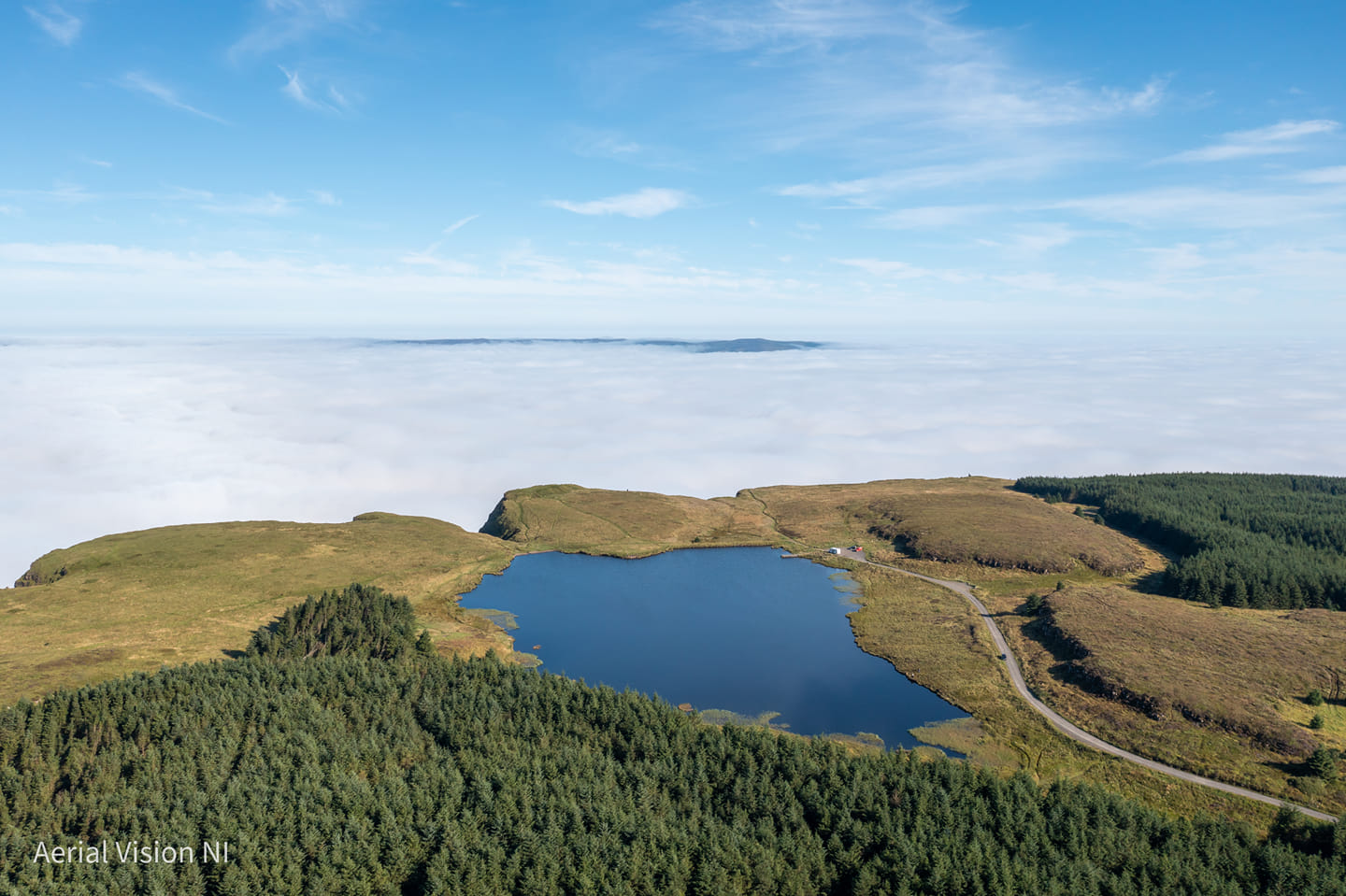 Binevenagh Mountain is the westernmost point of the Antrim Plateau. Six miles of steep cliffs overlook the villages of Bellarena, Downhill, Castlerock and provide spectacular views of Benone beach. The story goes that Vikings intent on pillaging the monastery of Derry turned on their heels when confronted with Binevenagh rising through the mist, thinking it to be the largest castle they'd ever encountered. The clifftop artificial lake on Binevenagh has a permanent stock of up to 2000 rainbow trout and must be one of the highest fisheries in Ireland. At the end of a long forest drive you arrive at a quarry dust car park. There is disabled access along part of the lake shore and level walking for those not inclined to fish. Fishing or walking, warm clothes are advised as beautiful cliff-top views over Benone Strand mean the area is very exposed. Thanks to Aerial Vision NI for this amazing photo of a cloud inversion from above Binevenagh Lake (see the Photo Credits page for credits for photos used throughout the site). 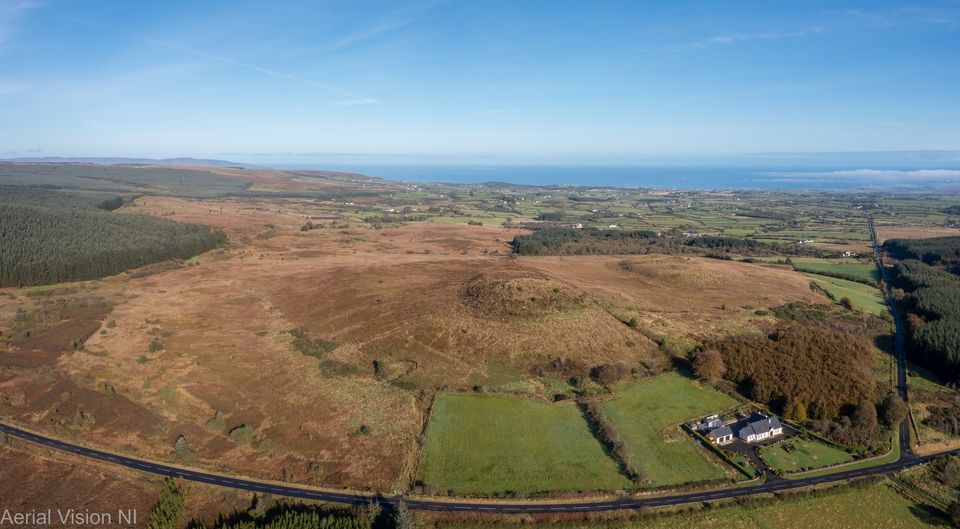 The 'Giant's Sconce' located on Sconce Hill off the Windy Hill Road was originally an iron age fort. Dun-da-Benn according to mythology belonged to Niall of the Shining Deeds one of the legendary Red Branch Knights and controlled the border between the hostile west and east Ulster. Although Dun-da-Benn was long assumed to be what is now known as Mountsandel Fort, the Giant's Sconce is now considered a likely alternative and certainly matches the description. The Ordnance Survey of the area in the 1830s describes 2 large and 5 small forts in the townland of Dunmore, 1 in Bolea, 1 in Derrymore, 3 in Carrydoo and another 3 in Leck. Obviously the area has a long and illustrious history of human settlement and was of strategic importance. "One of the forts in the townland of Dunmore occupies a small conical-shaped hill on the north side of the pass from Newtownlimavady to Coleraine, between the Keady and the mountains on the north of it. It is called the Duin. It has been formed by cutting the summit of the hill into 2 parapets, the outer one being 7 and the inner one 5 feet feet high. The diameter formed by the inner is 75 feet."